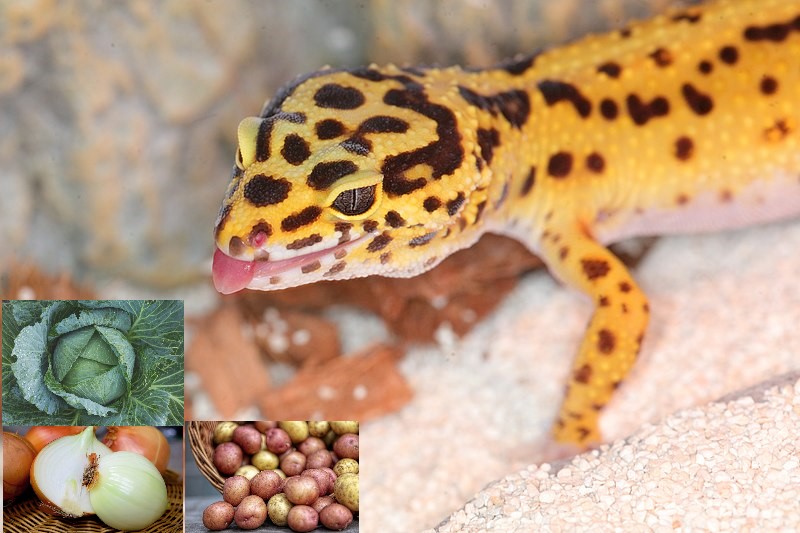 Leopard Geckos are insectivores, which means that they live on a varied diet of insects. They lack the necessary parts that can break down vegetables and fruits so don’t feed them anything but insects. More than that, these geckos prefer live prey and might not even touch the insect if it’s dead.

In this article, we’ll talk about how do Leopard Geckos react to vegetables and what else you can feed them.

Can Leopard Geckos Eat Vegetables? What Types of Veggies Are Fine?

A Leopard Gecko might attempt to eat a piece of vegetable if it’s curious about it or if it’s starving and it doesn’t have another choice. Otherwise, your pet Leo won’t eat any type of veggie no matter how tasty you think it is. If you want a gecko that eats veggies and fruits, you can opt for one that is an omnivore. But Leopard Geckos are strictly insectivores.

The part of the body that breaks down cellulose and everything that can be found in a vegetable is missing in Leopard Geckos. This is why eating a veggie can cause them pain while it’s being digested. Some Leos might like licking a fruit and even eating a thin slice but that doesn’t mean that it’s good for them. A Leopard Gecko should only be fed a varied diet of insects.

There is no vegetable that is OK for Leos. If yours absolutely loves a bit of veggie, don’t give it to them in pieces. This will make it hard to digest. Instead, take a very small piece and smash it with a fork until it becomes a puree. Then you need to add a very small teaspoon of fruit-flavored baby food. Mix everything very well and offer it to your gecko on a plate. This mix can only be given to a Leopard Geckos at most once a month.

No! Leopard Geckos should not eat carrots as they simply don’t have the necessary mechanism to digest them properly. Carrots are also very hard so make sure they don’t hurt themselves trying to bite into one out of curiosity. Carrots don’t offer anything good to a Leo so there’s no point in feeding it any type of carrot.

You might see your Leo nibble at a piece of veggie but that doesn’t mean that it needs or should eat said piece of veggie. Potatoes are a big part of a human’s diet but they should never make their way into your Leo’s diet. Avoid giving them any type of potatoes, be it raw or mashed.

Leopard Geckos should avoid broccoli as they’re a bit too acidic for them, besides being of vegetable matter. In fact, you should avoid feeding the feeder crickets broccoli so it wouldn’t get passed down to your Leo later on, during mealtime.

Cabbage doesn’t contain the nutrients a Leopard Gecko needs to remain healthy and happy. They’re insectivores and they have to eat insects and worms to get the things they need. However, you can feed the feeder insects cabbage with 24h before being fed to the geckos.

Beans should never be included in a Leopard Gecko’s diet as they don’t contain anything the gecko can benefit from by eating them. Keep the beans for the feeder insects or simply stop buying them as they are not a good food source for Leos at all.

Besides not being able to digest salads efficiently, geckos will most likely avoid salads because they don’t like the taste either. However, salads are excellent for feeder insects, especially crickets.

It’s a very well-known fact that onions are actually very toxic to a wide range of animals, including dogs and cats. And while there are no studies on the toxicity of onions in reptiles, it’s pretty clear that you should avoid feeding them to your Leo.

Cucumbers are another type of vegetable that works very well for humans but should never be offered to a Leopard Gecko as it won’t be able to digest them well. Feed the cucumbers to the feeder insects and they allow to gecko to enjoy the gut-loaded insects.

What should you give a Leopard Gecko instead? Insects and Worms

Leopard Geckos thrive on a mixed diet of crickets and mealworms as a staple food and a few waxworms, silk worms, and butterworms as treats. They can also eat cockroaches, dubia roaches, superworms, beetles, etc. And avoid ants, dangerous spiders, and other similar insects.

Crickets are some of the most well-balanced insects in nutrients and they provide a huge part of everything a Leopard Gecko needs to lead a healthy life. They’re very easy to digest and since they are active creatures, they can wake the hunting instinct in any gecko. This is great for geckos that are problematic eaters.

But if you have a sick gecko, you should opt for other insects that don’t move around as much. Crickets also tend to hurt the gecko if they have the chance, so make sure you don’t place more than two at a time in their enclosure.

Keeping crickets is not very easy as they are extremely noisy creatures and can stink very badly. Crickets are also well-known escape artists that will find a way out of almost any container. But geckos love them and they play an important role in their healthy lifestyle.

Mealworms are less nutritional than crickets and they tend to be a bit harder to digest, but they are extremely easy to keep. They’re also not very active, which means that sick geckos can eat them easily. Just make sure they can’t escape the feeding dish as they will burrow in the enclosure’s substrate.

Keeping mealworms is very easy. You can buy them in bulk and they come in cans with the food already included. And if you want them to last longer, you can place them in the freezer so they can get into their inactive state. Then, they won’t need food or water. Mealworms are also completely quiet and they don’t stink.