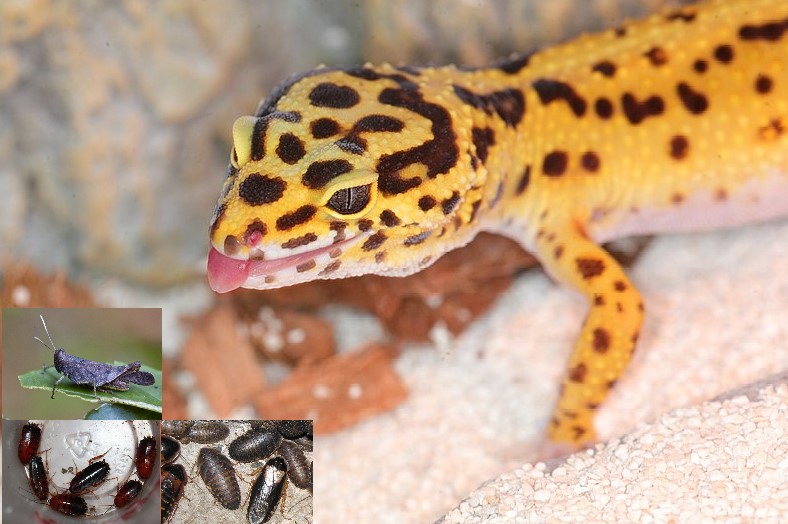 Leopard Geckos are some of the most popular geckos kept as pets in the world. They’re known for their docile behavior and can make great companions. But it’s very important to maintain a healthy and varied diet for the geckos to lead a happy life. They’re insectivores and you will have to find a nearby supplier or keep your own feeder insects.

In this article, we’ll talk about the insects a Leopard Gecko can eat and what its diet should look like.

Can Leopard Geckos Eat Insects? What Are The Main Types?

Leopard Geckos are obligate insectivores, which means they only eat insects. And one of the most important things you need to keep in mind is that this specific type of gecko prefers live prey. Dead insects to them can be compared to a spoiled meal to us.

These geckos are also driven to eat by how active their prey is. You will quickly notice how eager your Leo is to hunt a very active insect compared to one that doesn’t really move around. It’s very important to keep the insects alive no matter what you decide to feed your pet.

When it comes to feeding a gecko, there are typically two types of foods, stapler, and the occasional snack. Stapler food is the one you will feed your gecko on a regular basis. It needs to be balanced in nutrients and not high in fat. And if you can mix different insects, your gecko will appreciate the variety.

Occasional snacks are the insects that don’t have enough nutritional value to be considered stapler or are simply too high in fat and can cause obesity. These insects need to be fed with caution and not exceed more than two or three every week.

The main types of stapler food are crickets and mealworms for these geckos. Crickets are very balanced in nutrients and are not high in fat. This easily makes them a winner among gecko foods. They’ve been used as stapler food for a very long time and they don’t seem to go anywhere.

However, there are also a few drawbacks when choosing crickets as stapler. First of all, if the gecko is too weak, the cricket can actually harm it in an attempt to escape the enclosure. But this is also what makes the geckos so eager for them as they love to hunt.

Another disadvantage is the fact that keeping them can be a real nightmare. They’re very loud and are known to be escape artists. But the good news is that there are a few species that don’t make any noise. So if you’re lucky enough to find a nearby provider, go for them. Crickets also stink and need quite a bit of care to remain alive and healthy until it’s feeding time.

Mealworms are not as nutritionally balanced but since they’re not active creatures, sick geckos can eat them peacefully.

If crickets are too much of a hassle to keep, mealworms and mealworm beetles are highly recommended. They don’t contain as many nutrients but you can easily just add another insect to every meal to make up for it. Leopard Geckos absolutely love crickets and mealworms and they thrive on them. But you should also keep in mind that some geckos just don’t want mealworms and you will have to find a replacement.

Feeding a gecko only mealworm beetles is not a very good idea but they’re excellent as stapler food. In fact, many of the long-living captive geckos are on mealworm diets. Just talk with your exotic vet about finding a way to balance the meals so you can still include a bit of variety.

As mentioned before, mealworm beetles are not very active, which means that you can use them to nurse a sick gecko back to health. They’re also great for disabled geckos that can’t enjoy hunting crickets around the enclosure any longer. Just make sure the worm is not bigger than the space between the gecko’s eyes so it wouldn’t have trouble eating it.

Keeping mealworms is easily the easiest thing to do. You can get them in bulks and they typically arrive in cans that already contain the food they need for a pretty long time. They also make no noise, have no odors, and you don’t have to worry about them escaping. More than that, you can make them last longer by placing the can of worms in the freezer.

Cold temperature makes mealworms get into an inactive state. During this time, they don’t need food or water. And you don’t have to worry about them dying as this is a natural process for them. But they might be a bit harder to digest for some geckos. And mealworm beetles can be kept in a container with food and water. 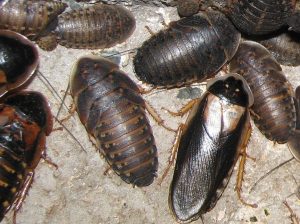 Dubia Roaches are great for Leopard Geckos as they are high in protein, fiber, calcium, and phosphorous. They’re also low in fat so you don’t have to worry about your pet gaining weight. Keeping these insects is typically an easy job as they are quiet and don’t sell. Breeding them is also very easy, especially since most of the time they breed on their own.

It’s very important to get them from a reputable supplier as Dubia Roaches are very clean creatures and they’re great at staying away from parasites. And since they can’t climb smooth surfaces, a good container can easily hold them. They’re very easy to store. Just remember to clean their environment regularly.

As long as the beetles are not larger than the space between the gecko’s eyes, they are an excellent food source for your pet. They can eat mealworm beetles quite easily as they tend to be very slow creatures. And if you want to save some money, you can just keep beetles on your own.

Beetles are easy to breed and keep as long as they have the food and water they require. Just make sure you’re not losing any of the beetles inside your home as they can be pretty hard to locate afterward.

You should keep your Leopard Geckos as far away from ants as possible. Ants might look extremely small and harmless but they can do some serious harm to your pet. They can make geckos very sick, and can even kill your pet.

Leopard Geckos need live food and live ants can bite and injure your pet when it tries to eat them. There are lots of other options available.

In the wild, Leopard Geckos tend to actually eat lots of large spiders. But in captivity, you need to be very careful as spiders can be very dangerous and full of parasites. You can get rid of the parasites by freezing the spider and thawing it before a meal. But these geckos only eat live food.

Most of the time, Leopard Geckos will refuse Rolly Pollies as they simply don’t like them. But even if your gecko likes them you might want to opt for another type of insect. Rolly Pollies have a pretty hard shell, which makes eating pretty difficult for geckos.

And never feed the ones you find in your garden to your gecko. They can carry parasites that will later make the gecko sick. If you want to let your gecko try them out, make sure you get them from a reputable supplier. 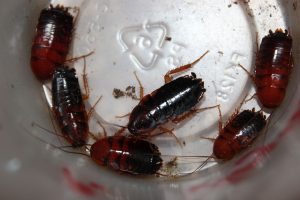 Leopard Geckos are generally big enough to eat a very wide range of cockroaches. But if they seem too big, then avoid feeding them to your Leo. The width of the insect needs to be smaller than the space between a gecko’s eyes.

Never use a Leopard Gecko to get rid of a cockroach infestation as they can have parasites.

Generally, moths shouldn’t be a problem for Leopard Geckos. But some moths tend to be quite large. Make sure the moth is the right size for your pet so it wouldn’t choke while eating. And avoid catching the moths that are around your home.

If your gecko caught a moth on its own while being out of the cage, keep an eye on it for the next few days to make sure nothing happens.

Leopard Geckos tend to avoid insects that are not fed live at all costs. This means that getting dried crickets is most definitely a waste of money. But if by some miracle you have a Leopard Gecko that eats dead insects as well, keep in mind that dried crickets don’t have the same nutritions and should only be fed occasionally.

There’s nothing wrong with dried crickets. It’s just a matter of losing most of their appeal in front of a gecko. 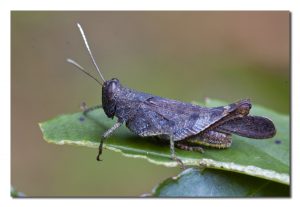 Crickets come in a very wide range of types. Some are mute, others don’t jump, some can’t fly, etc. Black Crickets are much slower than the brown ones, which allows your gecko to eat them a bit easier. Crickets tend to nibble on geckos and hurt them when they’re placed in your pet’s environment.

If your gecko is a picky eater and you want to leave a few crickets in its cage, overnight, make sure you’re also leaving them some food. Some grated apple or carrot is all they need to not attack the gecko.

Ladybugs tend to be quite popular and you probably have lots in your garden. However, they’re a bad food source for your gecko. This is because ladybugs may be full of pesticides from all the things it eats. These pesticides can cause a lot of harm to a Leopard Gecko and it’s best to avoid them.

But if you can get them from a good supplier then they are acceptable food. However, there are easier and cheaper options available.

Avoid feeding your gecko Earwigs at all costs. These insects are known for their very painful bite and can cause a lot of harm to your pet. If your Leopard Gecko eats dead insects, you might be able to feed it Earwigs if you cut their heads off before feeding. Otherwise, avoid them and feed your gecko a few crickets instead.

What can leopard geckos eat besides insects?

Leopard Geckos are not omnivore creatures that can eat both insects and fruits. But some of them can actually taste and lick a few pieces of fruit from time to time. However, it’s best to mix the piece of fruit with baby food and place it on a plate and let the gecko lick everything if it likes it.

These geckos don’t eat fruits in the wild unless they are absolutely desperate for food. So avoid giving them fruits every week. A teaspoon of baby food and fruit mix is enough each month. But this is only recommended for geckos that actually like trying a fruit from time to time.

You can try a few pieces of exotic fruits such as mangos, bananas, peaches, etc. The fruits need to be cut into very thin and small slices so the gecko can eat them easily. It’s even better to make a paste out of them and mixing it with a teaspoon of baby food. This mix should not be offered more often than once a month.

Bigger geckos are known to love eating pink mice as well. But Leopard Geckos are typically a bit too small to be able to eat a pink mouse without choking. Make sure the food you’re giving is your gecko is nutritious and easy to eat. When in doubt, contact your exotic veterinarian.