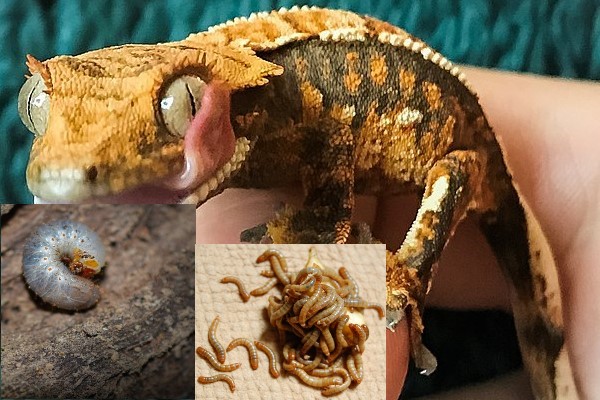 Crested Geckos are omnivore creatures, which means that they need a balanced diet between insects, worms, fruits, and vegetables to lead a happy and healthy life. Worms are excellent treats for these types of geckos but should only be given in moderate quantities.

Too many worms can cause trouble for Crested Geckos as they can imbalance the phosphorous-calcium ratio. In this article, we’ll talk about what worms can Crested Geckos eat and what does a balanced diet looks like.

Worms are a very popular food for almost any type of gecko kept in captivity. Some geckos need worms as their staple food, some only eat them as treats, and others can barely have one now and then. But overall, most geckos love worms and some of them find them the easiest to eat.

On the other hand, there are also worms that are much harder to chew and are very crunchy. This can cause trouble for some geckos as they are too small to eat them. Crunchy worms can also cause some problems with digestion as it takes a bit for the body to process them.

Worms are also very helpful for Crested Geckos that don’t eat dead insects but are too weak and hurt to eat more lively insects. This is because most of them have strong jaws and tend to bite a lot. But the best thing about Crested Gecko diets is that experts have perfect a powder formula that you can just add water to and offer it to your gecko. This cuts the need for live insects completely.

But many owners prefer ensuring a natural balanced diet that consists of insects, worms, vegetables, and fruits instead of commercial food. This is mainly because making sure the gecko keeps living a similar life as it did in the wilderness is important. More than that, feeding time is usually a great bonding time with your gecko, especially after you’ve earned its trust.

You should also keep in mind that any gecko should only be fed insects and worms that are not larger than the space between its eyes. If you live in an area where you can get giant worms very easily, it’s better to avoid them despite how easy it would make getting the food. Worms are ideal to be on the smaller side of the spectrum.

Hornworms are considered softer feeders as they are quite easy to chew and digest. This makes them great for both geckos in recovery as well. They’re not very high in fat content so you don’t have to worry about your gecko gaining weight very suddenly. But they’re also not high in all the nutrients a Crested Gecko needs, which is why they’re best as treats.

Another reason why they’re better as treats is their size. Most of them grow pretty large, which can cause problems for Crested Geckos during feeding time.

Earthworms are generally safe to eat but most Crested Geckos will turn their nose to them sooner or later. The good news is that your gecko won’t get hurt by eating these types of worms and they’re pretty easy to digest as well. Be careful about where exactly you’re getting them as they can carry various parasites that can later be transferred to your pet.

If they’re bought from a reputable reptile food supplier, you can use them as treats now and then. They’re not the tastiest for geckos but they are OK in an emergency.

Waxworms are known to be a bit too high in fat, which is why they’re almost never used as stapler food. Some keepers refuse to use them as treats as well. But Crested Geckos can eat them if they are only offered once a week or once every two weeks.

Just be extra careful about their sizes as some of them can grow a bit too large for Crested Geckos.

Superworms are some of the worms with an exoskeleton that is a bit too hard to eat and Crested Geckos are better off without them. More than that, superworms can bind up a gecko’s stomach quite easily and put your pet through a lot of pain.

While they are an option for many reptiles, they’re not among the first choices when it comes to treats and definitely not when it comes to staple food. They’re not recommended for hatchlings and juveniles at all. And you should be careful when feeding one to an adult Crested Gecko.

Mealworms and their pupa are often used as staple food for various types of reptiles, except Crested Geckos. They’re very high in nutrients but they also have a very hard exoskeleton and can cause impaction. It’s best to avoid them as staple food and opt for other types of worms that are considered soft feeders.

They’re accepted as treats and some geckos really love them. But it’s very important to make sure they’re not falling from the dish and into the substrate. They’re known to burrow and they can be hard to get out afterward.

Nightcrawlers are typically a bit too large as well but they can be fed before they are fully grown. This means that you will need to buy them in very small quantities so they won’t grow too big until feeding time. They’re also generally pretty easy to gut-load, which is very important in any feeder.

You should be able to get them from a nearby reptile food supplier and they’re usually a pretty affordable food source for Crested Geckos.

Every worm has its nutrients and its job in making a gecko’s diet as balanced as possible. These worms get their names from being very high in calcium and are an excellent way to add the needed calcium to a Crested Gecko’s diet. They’re 100% safe so you don’t have to worry about toxins and if they are provided by a reliable supplier, you won’t have to worry about any parasites.

Feeding calci worms two or three times a week is ideal, especially if you can mix them with a wax worm or two. Waxworms are great fat sources and these two types of worms are a great combination for the occasional treat.

Red worms are safe and they don’t produce any toxins either. And while they are easy to chew and digest, the real problem is that they secret a very nasty slime when harmed. This slime tastes very bad and most geckos will refuse to eat them after a while.

If your gecko isn’t bothered by the taste, then you can confidently use them as treats as they’re easy to eat. But since they’re not as high in nutrients, there’s no point in making them the staple food.

Grub worms include a pretty wide range of worms. Mealworms are grub worms as well. And their exoskeleton makes them a bad food choice. Typically, forest and soil grubs are pretty soft. But you need to be extra careful when choosing the right type as Crested Geckos can become picky eaters quite quickly.

If the ones you’re getting are great for Crested Geckos, then you can offer them as a weekly treat.

Morio worms are quite hard to gut-load as well. Even if you place the freshest and tastiest vegetables and fruits inside their containers, they might not eat if they don’t want to. This makes them hard to gut-load exactly a day before feeding them to your gecko.

But even without being gut-loaded, these worms are easy to eat and digest, which is why they’re great as treats from time to time.

Definitely not! Crested Geckos need a varied diet to get all the nutrients it needs. This is an omnivore creature and requires a carefully balanced diet to be able to get everything its body needs to thrive, not only survive. Feeding a Crested Gecko nothing but worms can have some very bad effects on its body and you might have to take it to the vet in just a few months.

In the wilderness, Crested Geckos rarely get to eat a lot of worms. Their diet consists of various insects, nectar, fruits, and some vegetables. And this diet needs to be replicated in captivity if you want to have one of these creatures in your home. But as mentioned before, there are commercial foods that can make your life a lot easier.

Worms should only be offered to these types of geckos as treats and nothing more. If the diet recommends adding a worm to the gecko’s diet because he noticed an imbalance in something, you can start doing so. But only under the supervision of your vet. Otherwise, you should only use them for occasional treats.

And again, you need to keep your gecko away from crunchy worms, such as mealworms, as they’re too difficult to chew and digest.

When feeding worms to your gecko, you should do it in an enclosed area even if there’s no risk for the worms to get out. This is because Crested Geckos are well-known jumpers and can be out of the container in the blink of an eye.

It’s better to get the Crested Gecko out of its enclosure into a container (with plenty of air circulation), than to place the worms inside its enclosure, especially if you tend to use a natural substrate. This is because worms often tend to burrow in the substrate and are hard to dig out.

What does a healthy diet look like, for a Crested Gecko

Commercial food is often the base of a healthy Crested Gecko diet. Follow the instructions on the package very carefully and talk with your vet about the food as well. This will ensure that your gecko gets everything it needs without risking you forgetting to add a specific insect or fruit to the diet that is very important.

But this doesn’t mean that you still can’t offer your Crested Geckos a few insects. This is actually highly recommended, although it should be done only as a supplement. Give your gecko insects that are very active, such as crickets, so they can exercise their hunting instincts.

After the gecko ate its commercial food, you can give it as many insects as it eagerly wants to eat. It’s very easy to notice when your gecko is excited about the prey and when it gets bored. You will have to prepare the insects before each feeding time.

This includes gut-loading them. You’ll have to place various vegetables and fruits inside their container and allow them to eat as much as they possibly can 24h before feeding time. Then you’ll have to dust all the insects with a calcium/vitamin D3 powder to boost your gecko’s mineral and vitamin intake. This needs to be done three times a week. And once a week you’ll have to dust them with a multivitamin powder as well.

How often does a Crested Gecko need to eat?

The amount of times you’re feeding your Crested Gecko depends on how old it is. If it’s a hatchling, you’ll have to feed it up to three times a day. A juvenile will need food once a day, and adults are OK with being fed three times a week. And since these are nocturnal creatures, make sure you’re feeding them in the evening as that’s when they’d typically come out to hunt.

If your gecko is sick and it’s trying to recover, you should start feeding it daily again. And only feed less active insects that are easy to swallow and digest. And offer them a teaspoon of mashed tropical fruit each meal until the pet is back to normal.