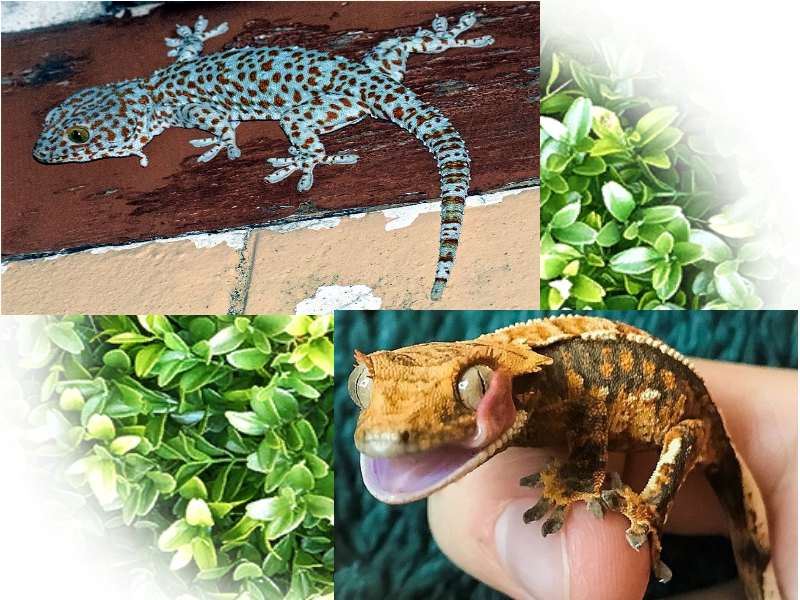 Geckos are becoming more and more popular as pets all over the world and they’re now quite easy to purchase regardless of where you live. Two of the most popular options are the Tokay Gecko and the Crested Gecko. They’re both excellent pets and in this article, we’ll talk about which gecko is ideal for you.

Tokay Gecko: Tokay Geckos are some of the biggest geckos alive today and they can reach up to 15 inches in length. They’re quite active and strong, which means they will need a secure tank to prevent them from escaping. These creatures are very beautiful but they are also very territorial and aggressive. It will take a long time to tame one but it’s definitely worth it. Tokay Geckos are not a good choice for first-time lizard owners.

Crested Gecko: Crested Geckos are some of the most interestingly-looking geckos in the world. They’re also known as “Eyelash” Geckos because they have a few spikes around their eyes. These creatures are quite small and they typically get to 8 inches long. And while they are small, they are also incredibly fast. They were thought to be extinct but they were rediscovered in 1994.

Tokay Gecko vs Crested Gecko – Which One Is The Better Pet? 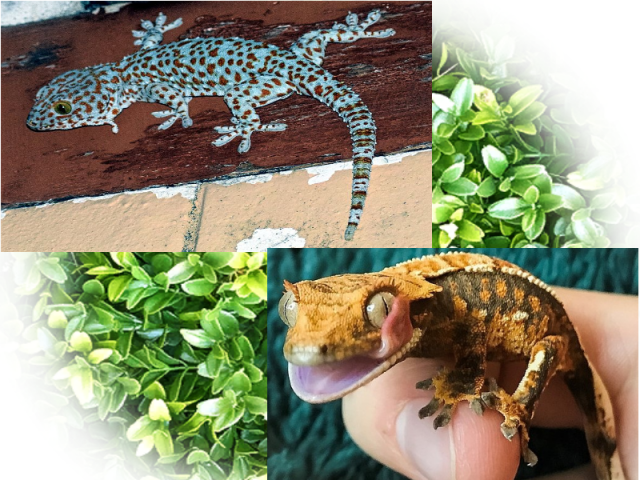 A Tokay Gecko is perfect for people that would rather just appreciate them from a distance instead of interacting with them too often. They don’t like being bothered and they can actually thrive living alone in a big tank. Even if you find them a good pair, they might still fight and end up with scratches you need to attend to very quickly. A lone Tokay is very happy as long as it has all the space it needs.

If you will try to handle the Tokay at the wrong time, it will try to get away from you and it might even bite. It’s best to only interact with them when it’s feeding time and make sure they have all the space they need inside the vivarium. You might be able to tame a captive-bred Tokay, but a wild-caught one can actually be dangerous and they should be avoided.

Crested Geckos can be aggressive when they’re small, which is why keeping multiple juveniles together can be a serious problem. But as they grow, they accept one another and can live with other crested geckos in the tank. Their slightly aggressive behavior as juveniles also means that you should be careful when handling them. They would rather prefer being left alone and admired from a safe distance.

Tokay Geckos are well-known for their quick temperament and territorial behavior. They will protect their territory at all costs against any other lizard, especially if it’s a male. These geckos love being as active and as vocal as possible at night, which is why it’s not recommended to place them in your bedroom. You might not be able to sleep as they’re only active at night.

Since they’re quite big they’re also strong enough to open the cage lid and escape. Make sure the enclosure is 100% secure as a Tokay running around the house can be a nightmare. They are very fast and will do their best to avoid you. Be careful when you catch them as they might drop their tail if they feel that they’re in danger.

A Crested Gecko often prefers to be left alone in its cage. These geckos are not big fans of handling but they accept it much faster than Tokays. But what you should pay extra attention to is their incredible ability to jump. They use their tail as support and often plunge from one place to another. This can easily happen while you’re handling them, which is why you should be very careful when you’re trying to tame them.

Can Tokay Geckos and Crested Geckos live together?

If you place a Tokay Gecko and a Crested Gecko in the same cage, it will most likely end very bloody and the bigger one will win. The Tokay Gecko will most likely win as it’s bigger and the cage won’t allow the Crested Gecko to escape to safety. Even when you’re introducing a new gecko from the same species you need to pay very close attention to how they deal with one another.

A Tokay Gecko is a very ferocious eater and you will notice how it enters its hunting mode the moment it sees an insect in its enclosure. It’s quite interesting to watch but don’t disturb the gecko while it eats as it will run and hide until you leave. With time, it will get used to the idea that you’re actually the one that brings it the insects.

When it comes to the types of insects a Tokay can eat, you can feed it almost anything as long as the prey is not bigger in width than the space between its eyes. This can include crickets, cockroaches, various worms, etc. And while they’re active and burn off some of the extra fat during the night, it’s still best to avoid insects that are high in fats for their regular meals. These insects should only be fed as a treat.

Crested Geckos are known to absolutely love baby food, which means you can give it to them up to 2 or 3 times a week. These geckos can eat both insects and fruits, but their main meals should always include insects. Baby food mixed with mango, banana, or peach is most appreciated. There are also various commercial foods that are specifically designed for Crested Geckos and they include everything they need besides live insects.

The cage a Tokay Gecko needs should always be taller than wider. They are arboreal creatures, which means they spend most of their time in trees and they love to climb. A 15-gallon tank is OK if you’re very low on space, but a 20-gallon is preferred. Cypress mulch and orchid bark are two of the most popular choices for substrates, but you can use newspapers as well, especially if you’re on a budget.

Tokay Geckos are naturally found in rainforests across Asia, which means they need a humidity that is up to 70% and never lower than 50%. And when it comes to heat, it’s best to maintain the tank around 80F. A side should be cooler and the other should be hotter. This will help the gecko regulate its body temperature just by walking around the enclosure.

Crested Geckos can thrive in 10-gallon tanks, and a pair can be OK in a 15-gallon enclosure. Coconut husk and soil are very often used as a substrate for these geckos and they’re both very good options. You should also make sure that the temperature always remains between 70 and 78F. When it comes to humidity, it needs to be quite constant and always remain between 50% to 60%. It’s highly recommended to use a hygrometer to monitor humidity.