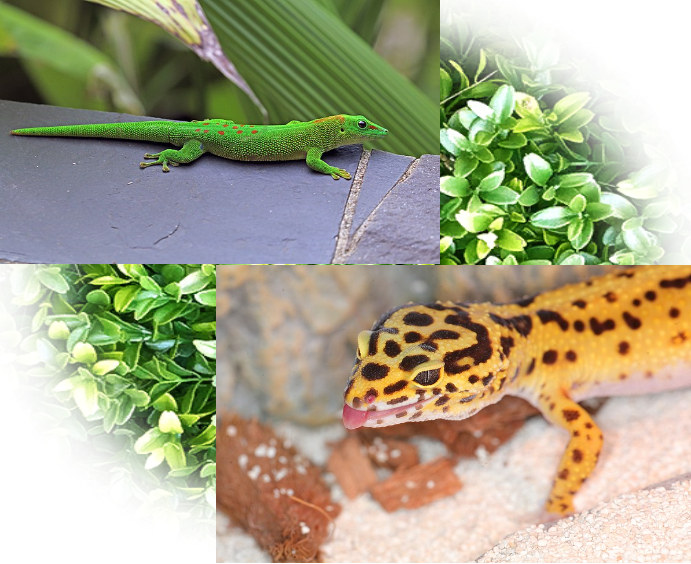 Giant Day Geckos and Leopard Geckos can be very interesting as pets. And the best thing about them is that they can be owned by both first-time owners and children. They’re pretty easy to maintain and you won’t have a lot of trouble taming them. However, they also have their differences and it’s important to know more about both of these geckos before making your final choice. In this article, we’ll help you decide which gecko is better for you.

Giant Day Gecko: Giant Day Geckos are some of the most beautiful geckos in the world. They are a bright and mesmerizing green and some red dots all over their back. These beauties can grow up to 10 inches in length and they can live up to 15 years in captivity. They are a docile species and with time they will trust you enough to eat directly out of your hand.

Leopard Gecko: Leopard Geckos get their name from their numerous black spots all over their bodies. And despite getting the name of a dangerous animal, they are known as one of the most docile geckos in the world. More than that, they’re the number 1 recommendation for first-time owners and children. They grow up to 8 inches and live around 15 years in captivity.

Giant Day Gecko vs Leopard Gecko – Which One Is The Better Pet? 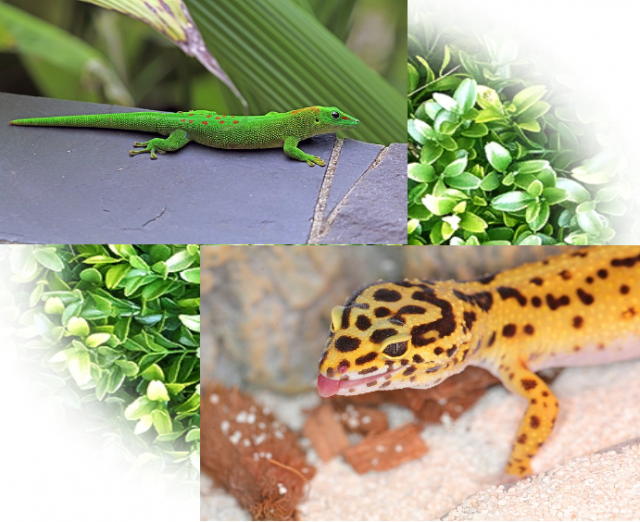 Giant Day Geckos are great to observe while they do various activities during the day. But sadly, despite being docile and very adorable, you cannot take this gecko in your hand any longer. This is because these geckos have a defence mechanism that makes their skill fall off when you’re touching them. If your hand is full of green after trying to pet the animal, it’s not uncommon but you should leave the animal alone. Other than that, they’re really good at being friendly with everyone.

Leopard Geckos are very beautiful as most of them have a light yellow color and they’re covered in black spots. But there are countless different morphs found among people that breed them for a living. Some don’t even have any black dots, others have much bigger dots, some have a very bright yellow color as well. And if you’re looking for a way to spoil your gecko but no name comes to mind, Leopard Geckos are widely known as “Leo” as well.

If you’re home often and you need a small companion, a Giant Day Gecko might be the best choice because they are diurnal. But if you’re a night owl, Leopard geckos are better as they are nocturnal.

Giant Day Geckos are only active during the day and they spend most of their time on the ground. They’re not big climbers. More than that, they don’t have sharp claws but they love sticking them on glass and getting around like that. This also makes them very fast and you need to be careful in case they make it out of their enclosure.

A Leopard Gecko will very rarely get angry and try to nip you. They are known for their docile temper and they are a joy to train. These geckos are also very brave and won’t scare away from you after a few days of getting used to the idea that they changed homes permanently. This will give you the chance of getting to know the gecko as fast as possible. If you love handling a gecko, Leos are ideal if you know what you’re doing.

Can Giant Day Geckos and Leopard Geckos live together?

Never even attempt to house a Giant Day Gecko and a Leopard Gecko together. It will turn into a violent fight before you realize what’s happening. Make sure you have a towel or a pair of mittens around so you can cover your hands while you’re breaking them apart and separating them. Their bites might not cause any damage but multiple angry bites from two geckos will cause some bleeding for sure.

If you want a pair, you need to get two geckos of the same species. And when you’re housing them make sure there’s only one male per cage as they will fight to the death over territory and females. On the other hand, females accept each other and don’t fight anywhere near as often.

Giant Day Geckos are omnivores, which means that they need to eat both insects and fruits. They typically eat crickets and other insects that are low in fat. Then they need a few pieces of tropical fruit, such as banana, peach, mango, etc. Brown crickets are ideal as the base of their diet, and a mix of baby food and fruit is great as a snack.

Leopard Geckos are insectivores, which means they will eat crickets, cockroaches, silkworms, butterworms, waxworms, etc. And since they store extra fat in their tail (it helps them go for days without food), they are capable of eating insects that are full of fats a lot better than other geckos. But it’s still recommended to use these types of insects only as treats.

Giant Day Geckos can live in small cages that are around 10 gallons as long as they’re alone. But they won’t have all the space they need. It’s best to get one animal in a 15-gallon tank, and a pair in a 20 or 25-gallon enclosure. They are a bit bigger and they need as much space as you can offer.

Almost any substrate that’s made for a rainforest vivarium is ideal for these geckos as well. This includes bark chips and coconut fiber. The heat should be between 80 and 88F during the day along with a basking spot that’s 90-95F. And the humidity levels should always be between 55% and 65%.

Leopard Geckos need a tank that’s at least 10 gallons, but it’s highly recommended to prepare one that is 15 gallons instead. The more space they have the busier they will be and they’ll even stop being so noisy at night. Coconut husk is great as a substrate but you can also use newspapers and paper towels when you’re on a budget.

The heat level should remain between 75 and 80F on the cool side, around 80-85F on the warm side, and it’s also a must to provide a basking area that’s between 90F and 95F. Leopard Geckos are desert geckos, which means they thrive when the humidity remains between 30% and 40%.