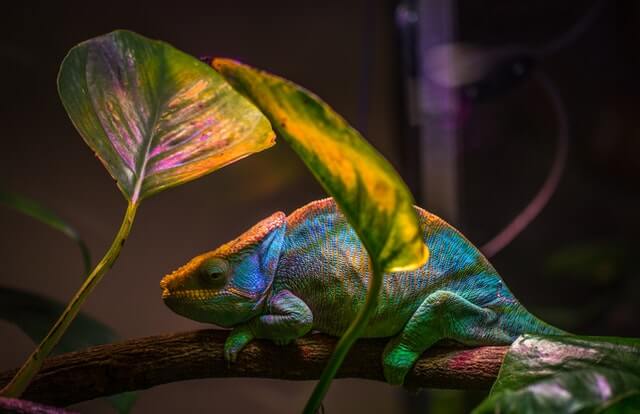 Do you want to learn more about lizards in general? What better way to do it, than by reading our list of fun and interesting facts about lizards. Keep reading, to check it out.

Currently, there are more than 6,000 lizard species all over the world. This is an estimation, and it doesn’t cover all the different species which are not around anymore.

2. The Iguana is the only herbivore lizard.

It will climb trees to find berries or fruits on which it will live. All others are carnivores, and they will feed on insects of varying sizes.

3. What separates lizards from snakes?

They’re both reptiles, but what sets them apart? It’s not the fact that one has legs and the other doesn’t because some lizards are similar in that regard (legless).

Instead, a lizard will have external ears and eyelids, while a snake doesn’t have them.

4. You will find lizards on most continents, except one (Antarctica).

Hardly a surprise, but lizards don’t do well in extreme cold, so while you will find them everywhere else, this is one continent they will most definitely be missing from.

5. While reptiles are generally cold-blooded, there are exceptions.

An example of a warm-blooded reptile is the Leatherback Turtle. It is thought that the dinosaurs were also warm-blooded creatures.

Otherwise, you can still count on the popular knowledge, that reptiles have cold blood.

6. Komodo dragons can be extremely dangerous, even to humans!

It’s the biggest lizard, and it has one special ability that can be interesting. Their saliva contains a bacteria that will paralyze the prey. Especially when they’re in groups, and with the help of this special ability, Komodos can go after pigs and cattle, or even humans.

7. The Mosasaur (now extinct) is the biggest ever lizard that we know about.

It was a species that lived in water, and it could reach a length of 17 meters. They’ve become extinct over 66 million years ago.

8. In winter, lizards will hibernate for the entire duration of the season.

They come out once the weather gets warmer. During cold months, they look for shelter under rocks, in tree trunks or other similar spots. Most of them will hibernate alone, there are a lot fewer that do it in groups.

During hibernation, they don’t need nearly as much food, and sometimes it’s even eliminated completely.

9. The world’s tiniest lizard species can be found on Madagascar island.

There are four species of tiny lizards, which have 1.5 cm (15 mm) as adults, that you will find on the island. They’re called Brookesia Tristis, Brookesia Confidens, Brookesia Desperata and Brookesia Micra.

10. The world’s largest recorded size for a lizard is for a Komodo Dragon.

What makes him special, is that it’s almost twice as big as the average dragon in the wild. It should be noted, that males are almost always bulkier and larger than female Komodos.