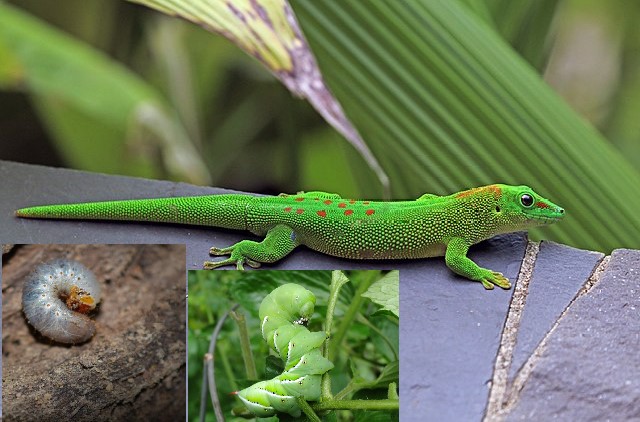 Giant Day Geckos are omnivorous creatures, which means you will need to feed them a mix of insects, worms, fruits, vegetables. This will help them thrive in captivity and there are various supplements to help them gain all the nutrients they need. Unlike some geckos, worms are ideal only as treats once or twice a week for Giant Day Geckos.

In this article, will talk about what kind of worms Giant Day Geckos eat and how often you should feed them.

Giant Day Geckos are generally large lizards and they eat most insects without any problems. But some worms are only recommended for adult geckos as they tend to have a hard exoskeleton and can be very difficult to digest. A prime example is the mealworms, which are very high in nutrients but can cause indigestion to smaller geckos.

But there are many other worms that Giant Day Geckos can easily relish on. This includes waxworms, calciworms, butterworms, etc. You should keep in mind that you should only feed them as treats and not as staple food. This is because waxworms and butterworms are quite high in fat and can risk obesity. And calciworms are very high in calcium so you should be careful not to feed too many to your gecko.

Generally, worms can be fed to smaller Giant Day Geckos as well. Just make sure that they are not larger than the space between the gecko’s eyes. Otherwise, the pet risks choking while trying to chew its prey. Superworms are generally a bit too large and hard to chew for hatchlings and juveniles.

Worms should either be fed outside of the enclosure or on a plate under your close supervision. This is because, despite the worms not being very active, they can still try to escape from the plate. Once they made it to the substrate they will start burrowing and it will be a hard time to get them out.

Hornworms are generally quite popular as gecko treats as they’re easy to eat and have quite a few important nutritional values. But since they are also very big, they are best offered to bigger geckos once they are mature enough to eat them without choking on them.

These worms are a bit high in fat content so make sure you’re not giving your pet too many to avoid obesity. You should also avoid buying them in bulks as they later become moths and some geckos don’t like them and you won’t have what to do with them.

Earthworms are not very large but they tend to be quite long. This makes them better for older geckos as well so they can eat them properly. But as adults, Giant Day Geckos can eat them without any issues and since they don’t really have an exoskeleton, they’re very easy to digest. Sick geckos can eat them as well.

You should be able to find them pretty much everywhere there is soil, water, and a decent temperature but they can still carry parasites and should not be fed to your pet. Find a good supplier and get them from an expert to ensure your pet’s safety.

Waxworms are some of the richest worms in fat content in the world. They actually contain around 25% fat and they are the larvae of wax moths. These worms are used as treats for pretty much any type of gecko that is big enough to eat them. Some geckos can eat lots of them as they get don’t easily gain weight, while others are better off without them as they can easily cause obesity.

Giant Day Geckos should not be fed more than one wax worm a week, maybe two, as they can easily gain weight.

Superworms look a lot like mealworms but they are quite different. They are naturally slightly big in size and their capability to bite in defense is impressive. This makes them a bad feeder worm for small geckos and you should also be careful when handling them as they can bite your hand as well. It won’t hurt you but a gecko will definitely feel the bite.

You should feed them as treats as while they are high in protein, they are also high in fat content. But they are loved by most geckos so you won’t have to worry about them being picky eaters. 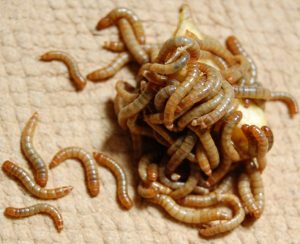 Mealworms are used very often as both staple food and as treats for different types of geckos. But since they have a hard exoskeleton, they need to be fed only to geckos that are capable of easily chewing and digesting them. This is why their pupa is often a better choice for younger geckos as it’s a lot more gooey and easy to digest.

These worms become darkling beetles when they mature and they are quite hard to eat by small pets. And this is why their pupa is a much better choice for sick geckos.

Nightcrawlers are large, reddish worms that are native to Western Europe but are now found pretty much everywhere around the world. They’re quite large and long and most geckos don’t really prefer them. But they contain a decent amount of nutrients and if your gecko likes them, they’re a great treat.

They’re easy to find in gardens, at night, during the summer, but they can also be full of parasites. Always contact a special food supplier if you want them.

Calci worms are common as treats as well. They are very rich in calcium, which is a very important thing to any gecko. There are also various supplement powders that can help with the calcium intake to keep your pets happy and healthy. They are very small and can be easily kept at home in a well-thought-out container.

These worms make no attempts to escape and they don’t require a lot of food. They might not be the easiest to gut-load but they are an excellent treat from time to time. One or two calci worms per week are more than enough.

Red worms are a species of earthworms but are rarely found in soils as they thrive in rotten vegetation. They’re not toxic and can be quite easy to digest. And since they don’t have a solid exoskeleton, even younger Giant Day Geckos can enjoy them. However, most geckos would rather run from them than eat them.

This is because they have a natural defense against predators that exudes a pungent liquid when they are just roughly handled. They’re also known as “foul-smelling” worms because of it.

Grubs are decent snacks for Giant Day Geckos but they might be a bit hard to digest for the younger ones. It’s best to only feed them to adults and not more often than once a week. They’re not toxic but they also don’t have the best nutritional values.

Morio worms are the exact same thing as the Superworms, just a different name. And as mentioned before, they’re similar to mealworms and make great treats for older geckos that are not affected by their bites. And remember to protect your hands with them as well.

Another thing to keep in mind is that despite being similar to mealworms, they need to be kept in warmer temperatures as they don’t enter the hibernation state that mealworms do. This will help you keep them alive for longer, which will be easy as they are known to survive between 1-2 weeks without any food.

While there are a few geckos that tend to thrive on a less varied diet, Giant Day Geckos should not be fed just worms. This is because they are omnivorous creatures and they need lots of different nutrients that can’t be found in worms. It’s a lot better to use worms only as an occasional treat or when you are trying to bond with your pet.

Some worms can be very high in fat content and can cause the gecko to gain weight very fast. This can cause various health issues and you will need to put the gecko on a special diet after consulting your vet. You can tell when the gecko starts to gain too much weight when its belly is not flat when it walks anymore. But don’t measure this right after the gecko ate.

When feeding worms to hatchlings, make sure they are not the type with strong jaws. The worms can bite a small and fragile gecko and even cause it to bleed. On the other hand, older geckos absolutely love them from time to time. Just make sure to never feed too many worms to your gecko as some worms can cause addiction. This can make your gecko refuse any other type of food and it will take a while to make it forget those worms.

What does a healthy diet look like, for a Giant Day Gecko

A Giant Day Gecko’s diet should contain lots of insects and fruits plus the occasional worm and vegetable. Brown crickets are usually the most used feeder insects as staple food. This is because they are quite high in nutrients, are easy to chew, are simple to hunt, and easy to digest. They make the perfect choice for Giant Day Geckos. But if you don’t have access to them, you can opt for black crickets or locusts.

The number of insects you feed a gecko depends completely on the size of the gecko. Hatchlings need between one and three insects each meal, juveniles need around 5 small insects a meal, and adults can eat anywhere between 5 and 15 insects per meal. It also depends on the size of the feeder insect and how high in nutrients it is.

You will also have to offer them fruits a few times a week. You will have to either slice the fruits very thinly or mash them until they become a paste. You can mix in some baby food that is fruit-flavored and a few pieces of veggie. This mix can be fed to a hatchling less than a teaspoon a day, around a teaspoon for juveniles, and a few teaspoons every meal to adults.

Worms should also be added from time to time as treats. One or two worms are more than enough each week. If you want to offer your gecko more treats, opt for the fruit mix. Place the paste on a small plate and leave it in the enclosure for a few hours. If the gecko doesn’t touch it by then, always remove it to make sure it won’t go bad.

How often does a Giant Day Gecko need to eat?

Hatchlings need a lot of your attention and you will have to spend quite a lot of time handling their food. They will need to be fed around 3 times a day and you need to make the meals as varied as possible. Be very careful with insects as they need to be very small, easy to chew, and very easy to digest. And it’s always better to avoid giving hatchlings any sliced fruit as it might be too big for them. You should always make the fruits and veggies a paste.

Juveniles are a bit easier to feed as they only need food once a day. They begin to eat a bit better, and bigger insects are no longer such a big problem. Still avoid mealworms and opt to make the fruits and veggies a paste instead of giving small pieces.

Adult Giant Day Geckos only need to be fed once every 3 days and their meals can be a lot varied. They can also start to eat slices of fruits and veggies without the risk of choking. And no matter how old your gecko is, make sure it has a bowl of fresh water every single day.